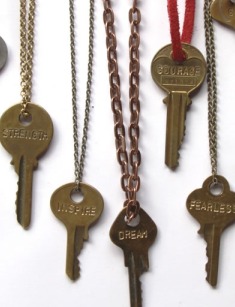 What started as a simple idea has turned into a well-known company that is not only fashionable, but also life changing. While staying in New York, singer/ songwriter, and eventual founder of The Giving Keys, Caitlin Crosby, decided to wear her hotel key around her neck. Initially, unaware of her fashion creation, Crosby was surprised at the overwhelming amount of compliments she received on her hand made creation. A short time later, Crosby discovered a key maker willing to give her his old keys. Crosby saw an opportunity to create a business based off of the creation she made in New York. However, she wanted her creations to go beyond style. Therefore, she decided to engrave inspirational words on the keys. 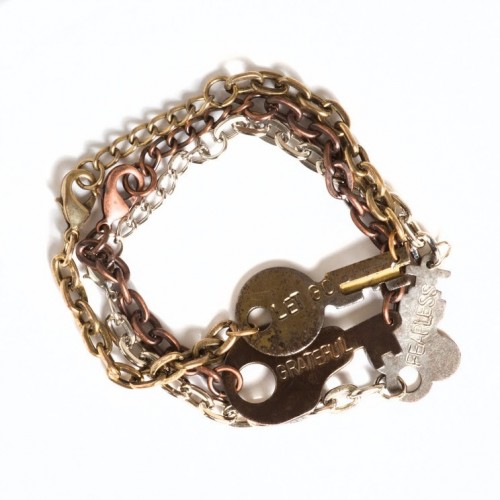 Having a strong heart for helping others, Crosby still felt there was a link missing from her business. Crosby was searching for something to bring a deeper meaning to her idea, and again, the inspiration came to her in an unexpected way.  After leaving a church in Hollywood one Sunday morning, Crosby ran into a homeless couple with a sign that read, “Ugly, Broke, and Hungry.” Crosby took the couple out to dinner and discovered that the young woman had a dream of making jewelry. It was then that she had an idea that would forever change her own life as well as the life of others. She decided that she would employ homeless people struggling to find work to engrave and make the jewelry for her company. Inspired by this couple, she also wanted her jewelry to hold a sense of inspiration as well. This is where the “giving keys” was created. Crosby wanted her products to not only be sold but shared. That is why every customer is encouraged to pass along their piece of jewelry to someone who needs the inspiration that the word on the key holds.

Today, The Giving Keys has become a popular accessory all over the world. Continuing to employ people who are in need of help, the company has grown in size and style. The keys are now being used on not only necklaces, but also on bracelets, key chains, rings, and shoes, all in a variety of styles. The Giving Keys is the perfect place to find a piece to top off almost any look, that is more than just fashionable, but also inspirational.