The Evolution of the Trench Coat 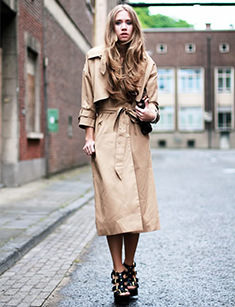 The trench coat, always prevalent throughout the fashion industry, is making big waves this winter. Originally worn for functional use as a raincoat, is now transitioning into becoming a major fashion statement worn by everyone from businessmen, to internationally known trendsetters and bloggers. Now seen with intricate details, creatively structured collars and lapels, and varying lengths and colors, we decided now would be a good time to go back and see where the trench coat really came from.

The trench coat claimed by both Burberry-the inventor of gabardine fabric, and Aquascutum with claims going back to the 1850s, was originally designed to be a rain jacket. Made from heavy-duty gabardine drill, it had a storm flap, raglan sleeves, wide lapels, and pockets that buttoned closed. Traditionally khaki colored, the coat was double breasted with ten buttons, and fell to just above the ankles.

Though, the jacket was developed prior to WWI, it become extremely popular during the war as a uniform coat used in battle. Because of the heavy-duty waterproof fabric, the coat proved to be highly effective and useful when fighting from the trenches-thus the name ‘trench coat’ was born.

During the Second World War, the coats length evolved to varying lengths, making it more functional for the mobile officers. The trench coat served as a windbreaker and rain jacket, but was never used for warmth in colder conditions, as they did not yet come with insulated lining.

After the war, the trench coat shifted from being officers uniform to symbolizing business and respect. Actors, Humphrey Bogart, and Peter Sellers popularized the coat, and to accompany the look, a fedora hat was often worn.

Overtime the trench coat served different meanings; flip flopping from fashion statements, to a forbidden symbol of mafia members. Now in 2015, the trench coat remains a popular staple along side jeans and a leather jacket. Made in various lengths, fabrics, and colors, the classic trench coat is just as popular as the day it was invented, serving as a symbol of true sophistication.