Return of the Space Age 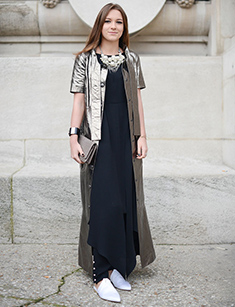 During the 1960’s there was a period in fashion known as the ‘Space Age’. The fashion designer primarily responsible for this trend was André Courrèges who launched a collection titled ‘Space Age’ in 1964. At this point in time, Science Fiction was becoming quite popular, especially in the movies. The idea of aliens and UFO’s visiting Earth was fascinating for American society and as a result it translated into fashion-as do most trends. With this fantasy in mind, André created his collection with-at the time-unconventional materials such as metal and plastic.

Now in 2015, history repeats itself. With all the attention on space travel, SyFy books, and dystopian themed movies, it makes perfect sense. What started with small metallic touches such as studs, pointed tip shoes, abundant buckles, and sparkles, has evolved to full blown metallic fashion collections. From patent leather, to coated denim, the sheen and sparkle is something everyone seems to want to wear.

We love this trend because it makes an outfit stand out without drawing in too much attention. It’s a bold move to wear metallic sheen jeans, but it blends in with the crowd more than for example a bright yellow pair would. If this shiny trend isn’t your thing, no worries! There are plenty of ways to incorporate and adjust the ‘Space Age’ trend to your liking. Anything from metal jewelry, to utilitarian silhouettes are wearable aspects of the SyFy world. Major fashion trends can be worn in everyday ways-you just have to be creative and not afraid to experiment!