The Most Legendary Super Bowl Half Time Outfits Ever 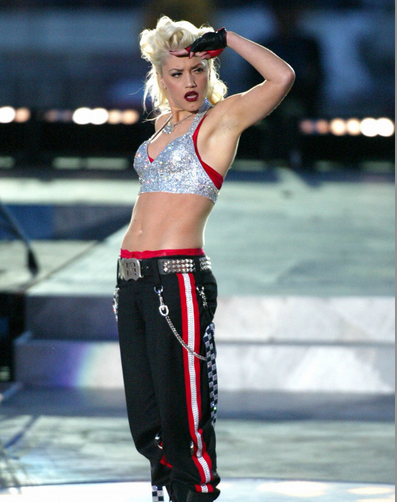 Whether you’re a big sports fan or not, we’re willing to bet a fair amount of you will be tuning in on Sunday to watch the Atlanta Falcons and New England Patriots duke it out for the title of Super Bowl champions. Whether for you it’s the sports, the hilarious commercials, or the food and company that comes with a good party, we know without a doubt which part of this sporting event is our favorite part… the halftime show of course.

This year’s star will be none other than, Lady Gaga. If her career so far is any indication, the only thing that’s going to be bigger than her performance is her wardrobe. While we can only speculate on what she might wear, in honor of the upcoming event, we thought you guys would want to take a look back at some of the best halftime show ensembles over the years, from Gwen Stefani’s No Doubt days to Beyoncé’s famous Formation performance last year! We know you fashionista’s minds are turning waiting to see what the notorious Gaga is going to be wrapped up in this year, but only us fashionista’s can appreciate and bask over these past Super Bowl attires!

We have to start with the King of Pop himself and wardrobe legend.. Michael Jackson. Not only is his Military style jacket a statement piece, but we get to see other celeb’s rock MJ’s look at future Super Bowls. Asymmetrical designs, Aviator shades, and Golden embellishments to make the King of Pop’s 1993 half time show one for the books. 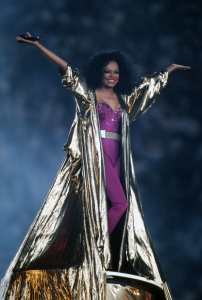 One of the most influential American singers of her time, and absolute fashion diva, Diana Ross. It doesn’t get more Supreme than this outfit, a shape perfect magenta jumpsuit, studded with perfect rhinestone embellishments, and a golden quarter sleeve kimono to top it off. If this outfit doesn’t say Supreme or Super Bowl, we don’t know what does. 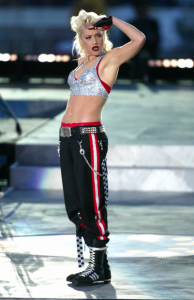 Gwen Stefani, our favorite 90’s tomboy. Not only can Gwen hang with the boys, her style is no doubt iconic, literally. Stefani has been known for her creative street style looks from her many performances, all the way to the red carpet. However, when it comes to the super bowl we had to mark Gwen’s 2003 half time show as one for the books. From her checkered strapped jump pants, studded belt, and glittered halter with vibrant fireman red to her killer abs! Gwen knocked this look out of the park, and it deserves a spot on our favorite Super Bowl style list. 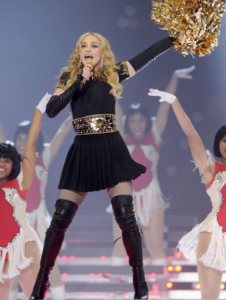 Not only is Madonna notorious for her over-the-top and extravagant outfits on stage, she also is a living legend of performances. Madonna’s 2012 Super Bowl half time show was an absolute treat to every 80’s fan out there. What we really loved though was her cheerleader styled ensemble, golden pom poms, and sexy thigh high boots to match Madonna’s iconic sex appeal. 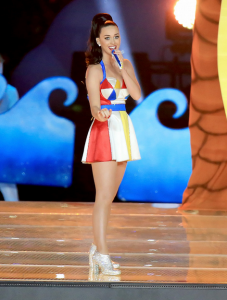 We love Katy Perry for her girl power attitude, but we love her just as much for her wacky, and out-of-this-planet wardrobe. Katy Perry’s enthusiasm in her performances makes her fans go wild and it doesn’t get more wild than the fans at the Super Bowl. Perry’s 2015 half time show wardrobe was absolutely stunning, not only did it match her original style, it also was themed perfectly with her popular song “California Gurls” representing lollipops, glitter, and the California sun. 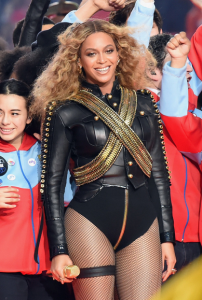 Didn’t we say that we would be seeing Michael Jackson’s statement military jacket again? Well here it is, on the one and only Queen B herself. Last years Super Bowl half time show not only caught attention for Beyonce’s social activist voice but also for her outfit of choice. Copying Michael Jackson’s 1993 military statement jacket, Beyonce took a more moderate approach with her notorious body suit. The star also spruced things up a bit with her sexy fish net style tights and black strapped guarder.

We can not wait to see what Lady Gaga has in store for us this year at Super Bowl 2017, and we are absolutely excited for not only her performance but of course her wardrobe. We hope these were some of your favorite looks from past Super Bowl’s and we would love to hear what you think about these iconic performances. Let us know in the comments below! We hope everyone has a safe and fantastic time this Sunday!