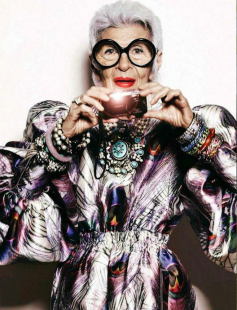 “Only one trip…might as well live it up!”, is Iris Apfel’s motto for living her life. At 93 years old, she has accomplished more than most. She has an admirable style, uniqueness and energy; but what is most inspiring is Apfel’s commitment to be nothing more or less than herself. In conversation with T magazine editor Deborah Needlman Iris Apfel says: “Everything that is important in my life has happened by accident.”

Iris began her career as an editor at Women’s Wear Daily and quickly realized that it was not for her. Later she became an in interior and textile designer. She and her husband, Karl Apfel, ran there own textile firm for about 50 years, until they retired. Along the way, Iris has also done several restorative projects at the White House.

Recently, Iris Apfel has become known as a style icon in the fashion world. She first came to prominence when the Metropolitan Museum of Art did an exhibition on her in 2005. It was first thought to be an exhibit on just Iris’s collection of jewelry. As curators began to go through her home and storage space (which is filled to the max), they ended up having about 300 garments. It was a successful exhibit and designers came from all parts of the world to be inspired by her colorful collection. 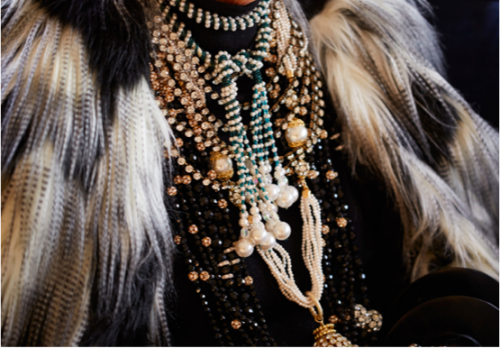 Apfel now has her own jewelry line called Rara Avis (named after the exhibition meaning Rare Bird) on HSN. It consists of a wide variety of statement pieces that reflect her style perfectly. As she said on an interview for Who What Wear: “If there was a choice on spending a lot of money on accessories or dress, I always chose accessories. I think jewelry can change an outfit more than anything else.” This emphasis on accessories is mirrored in her own designs. Although, Iris does explain that style is an attitude and self-expression. Style is who you are, what you want and like.