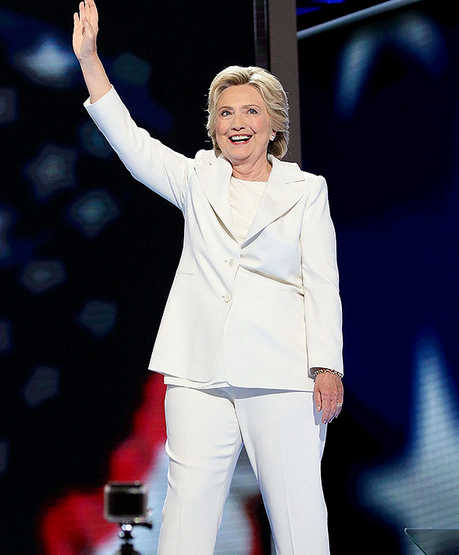 Hilary’s fashion wardrobe for the Democratic National Convention was not any ordinary pick, but a very precise outfit to express a bold statement by the senator herself. Hilary Clinton wore a white pantsuit to contribute to her race to the white house in a world that revolves around branding and marketing. Hilary calls herself a “Pantsuit Aficionado” not only because she believes that women should be able to wear whatever it is they chose, and not what society expects them to wear. As a matter of fact the senator was takes the title of being the First Lady in the White House to wear pants when Bill Clinton was president.

She has basically always been seen in trouser suits, typically a businesslike style that would be fit in a boardroom as well as the White House. So it is no surprise that on the night of her acceptance speech at the DNC, Hilary wore her trademark suit. However, it wasn’t just the crisp, clean pantsuit that caught everyone’s attention. It was further than that, it was what the color of the pantsuit represented. White for purity, white for angelic, white for suffrage, white for new and fresh, and white for the White House. Social Media soon became filled with feed’s about how symbolic Hilary’s fashion statement was. 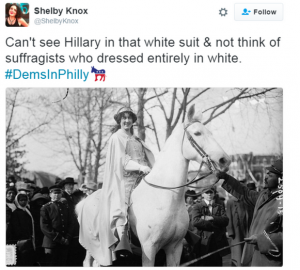 The message that Hilary was getting across at the DNC was that she is breaking through the US political glass ceiling is the equivalent modern-day example of suffragettes clad in white, fighting for women’s rights. Lisa Armstrong from the Daily Telegraph fashion directory stated, ” There is no template for how women politicians need to look on political stages.That’s where it gets tricky. But she’s pretty much got her look sorted now. She’s incredibly groomed, she’s on top of her hair,” she says, “and that’s important because humans are biologically programmed to make very quick decisions. The message is sent across instantly.” 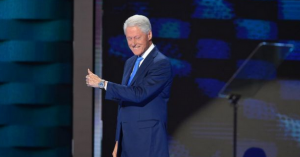 Bill Clinton’s low-key fashion appearance as he made his speech to the Democratic Convention on Wednesday night.Fashionistas are describing his navy blue suit as “a fetching pantsuit”. Other details in his attire included a cobalt blue tie, and a little lapel badge spelling Hillary in Hebrew. Smart, but not overpowering was the verdict on social media. The magazine Quartz put it like this: “As a fashion moment, it might have been a little underwhelming, but as a historical one, it was not. Clinton’s look stated clearly: I’m with her.” It seems Bill Clinton got his message across.