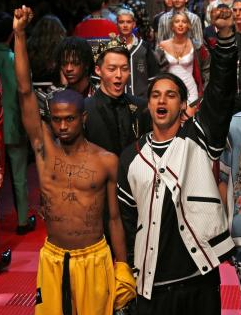 The most expected/unexpected thing happened during Dolce & Gabbana’s Spring/Summer ’18 runway show this past Saturday at men’s fashion week in Milan: A millennial millennial’d and spoke his mind. Raury, Atlanta native and hippie soul singer, walked in D&G’s #millennial-themed fashion show, and then did what millennials do best and went rogue at the very end. 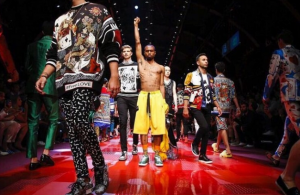 For the second season in a row, the Italian house brought in young social media influencers to wear their clothes down the runway. Dolce & Gabbana, who have dealt with controversy before after Dolce’s statements on gay parenthood, had taken fire recently for proudly dressing America’s first lady, Melania Trump. In reaction to the criticism, the design duo launched a tongue-in-cheek meta-campaign dubbed “Boycott Dolce & Gabbana” across the designer’s social channels. In addition to a T-shirt bearing the slogan, they produced a commercial featuring a bunch of kids joyously “protesting” Dolce & Gabbana with Domenico Dolce and Stefano Gabbana. As Dolce told Vogue before the show: “It’s irony! A joke! People use heavy words very easily these days. There is too much aggression.”

That was before Raury, walking in the finale, removed his Dolce & Gabbana bomber and hoodie to show words scrawled on his chest: PROTEST and DG GIVE ME FREEDOM and I AM NOT YOUR SCAPEGOAT. He disappeared immediately after leaving the runway, not joining the rest of the models for photos. A recent article with GQ spoke with the rogue millennial Saturday night (before he left Italy early the next morning) to understand why he chose to protest the campaign from the runway, and to briefly see the world of fashion and celebrity through the eyes of a 21-year-old.

GQ asked: Let’s start at square one. What did Dolce & Gabbana do that you felt was wrong?
Raury: The “Boycott Dolce & Gabbana” T-shirt they created completely makes a mockery of what “boycotting” is. Boycotting is the people’s voice. A protest is the people’s voice. It has power. It changes things. When I came out to Milan for my first time walking on a fashion runway, ever. I was excited. I’m a stylish-ass young kid but I don’t know everything about fashion. I knew nothing about the T-shirt until I was here. I had already agreed to walk for them. [The day before the show] I googled “Dolce & Gabbana” so that I could know who was who when I finally met them. I didn’t want to be disrespectful to either one of them by calling them the wrong name. When I typed up their names the first thing I saw was a headline on Fortune.com, “Dolce & Gabbana Is Trolling Melania Trump Critics With This $245 T-shirt.” National Post, AOL, etc. And then I saw a commercial featuring the boycott T-shirt and it looked playful and light hearted—it was a joke. It was a troll. Me, as a young man from Stone Mountain, Georgia, the birth place of the Klu Klux Klan, I really felt this mockery of boycotting. Who knows if boycotts didn’t happen, if Rosa Parks and M.L.K. didn’t step up… who knows if I would even exists. Boycotting matters. Boycotting is real. Dolce’s entire campaign says it’s not real. I know that if I walk out there and support or endorse anything that sits next to Trump—or support someone who even makes dinner for Trump or whatever—then that means that I support Trump also. I don’t support Trump. So I’m trapped and I have to let people know that I don’t support Trump and I don’t support those who are trying to undermine the voice of the people.

Raury went on to talk about other issues that he believes our society is facing today, and how the fashion industry is influenced through political movements. The model does not think he will be walking with DG anymore, yet believes that he will still be booked regardless of his actions on the runway.

We want to hear what you think? Give us some of your feedback in the comments below!