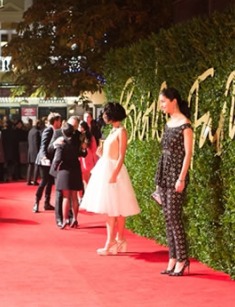 Every year since 1989, the biggest fashion designers, celebrities, models, and style icons gather in one place to celebrate and honor the great fashion influencers and achievements of the year. This event is known as the British Fashion Awards. This year the British Fashion Awards were held on December 1, 2104 at the London Coliseum. The event was hosted by Jack Whitehall and honored both British and international fashion industries. This year tickets sold out faster than they ever had in the past, bringing the total number of attendees to approximately 2,070 people. Some of these celebrated quests include Rihanna, Kate Moss, Victoria and David Beckham, Naomi Campbell, Cara Delevingne, Anna Wintour, Lana del Ray, Ana Kendrick, Jeremey Irvine, Harry Styles, Emma Watson, Rita Ora, and Kendall Jenner. With an outstanding venue, 63 nominees, and 17 awards given, the British Fashion Awards this year was one to be remembered.

Many talented and well-known fashion professionals and celebrities were honored for their achievements, contributions, and work in fashion. This year, Ana Winter was the recipient of the Outstanding Achievement Awards for her influence and success in the fashion industry. Chris Moore received the Special Recognition Award honoring his six-decade career in fashion. Edward Enninful was recognized with the Isabella Blow Award for Fashion Creator. Victoria Beckham won in the Brand category for the outstanding stamp her brand has made on an international level this past year. Emma Watson received the only award that is voted on by the public, the British Style Award, acknowledging her influence on fashion and style choices in the public eye.  Other winners included Marques ‘Almeida, Craig Green, Prisim, Alexander McQueen, Cara Delevingne, Nicolas Ghesquière, Louis Vuitton, Simone Rocha, Preen, Anya Hindmarch, J.W. Anderson, and Erdem.

This award show has showcased some of the biggest and best in the world of fashion and this year was no different.  The British Fashion Awards truly embodies the success and strides made in fashion this past year.