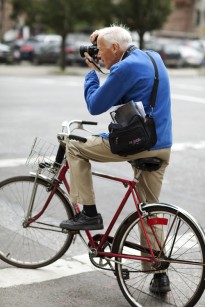 Street style photographers, in this age of blogging, have become very popular. But the one who started it all is an 85 year old man named Bill Cunningham. Cunningham cycles around Manhattan taking pictures of people who catch his eye for his column in the New York Times. He lives for the fashionably and peculiarly dressed. Unlike his subjects, Bill is a private person who stays true to himself and his ways. He wears the same khaki pants and blue windbreaker everyday & uses a film camera to capture his exquisite pictures. Maybe the best example of his tenacity is that unlike the many other reporters who stay in hotels like the Ritz during Paris Fashion Week, Bill prefers to stay in a small hotel. Without even a phone in the room, just a room to write a postcard.

Cunningham has two weekly columns in the New York Times called “On the Street,” which focuses on street style, and “Evening Hours,” which focuses on the elegantly dressed attendees at social benefits and galas in the city. It first started in  1978, when a woman wearing a nutria coat had caught his eye. Cunningham shot frame after frame of the coat, unaware of the fact that it was was Greta Garbo. Cunningham showed the pictures, along with some shots of Farrah Fawcett (whom he didn’t recognize as he does not own a television), and the King and Queen of Spain, carrying plastic grocery bags from Gristedes, to an editor at the The New York Times. Soon after, his column became a recurring feature. “On The Street” not only  displays clothes but demonstrates his ability to connect strangers and their ensembles by bringing a whole new meaning to the outfits. While displaying new color trends and social changes. Cunningham reported in an article for The New York Times: “It isn’t what I think, it’s what I see,” Cunningham said. “I let the street speak to me. You’ve got to stay on the street and let the street tell you what it is.”

Bill Cunningham New York, a documentary directed by Richard Press and produced by Philip Gefter was released in 2010. It is a heart warming and amusing film that tells Bill’s story and dedication to his work. It took them 10 years to produce. The first 8 years were spent convincing Cunningham; in 2008 they finally began filming. It is definitely a must see and an honor to get a glimpse into his life.

Images from The New York Times